BARNWELL, South Carolina – Educated in wood science technology, Graf Grote understands not only what needs to be inside the board, but also how to produce it thanks to his years at the other plants and in a centralized function at the Swiss Krono Group’s headquarters. 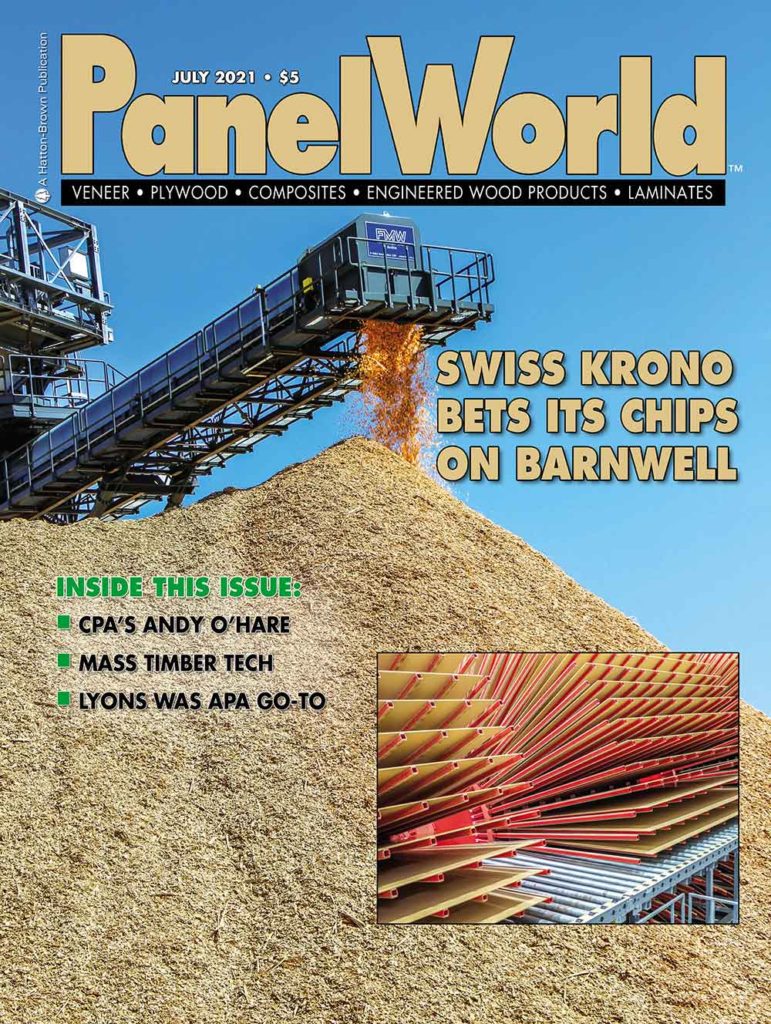 We are saddened by the demise of Katerra, the company that stormed in like gangbusters to put a totally new spin on how building construction is managed and completed. We’re very aware that many people in out industry are chuckling and saying “I told you so,” because many people took offense at Katerra’s brashness and many people didn’t see any way in heck that Katerra could pull off what it said it was going to do.

CPA’s New Chief O’Hare Nears Completion Of First Year In Position: One He Will Never Forget

EDITOR’S NOTE: Andy O’Hare became president of Composite Panel Association in August 2020. Nearing one year on the job, O’Hare was thrust into a pandemic situation as well as vibrant wood products markets. He will finally be able to move from “virtual” to in-person communication with CPA members at the 2021 Fall Meeting scheduled October 17-19 at the Lansdowne Resort, Leesburg, Virginia. O’Hare happily agreed to answer several questions posed by Panel World.

Maximizing The Life Value Of Your Veneer Drying Solution

If achieving consistent veneer sheet quality is essential to the success of your plywood or LVL manufacturing operation, then the veneer drying process is critical to those quality assurance efforts.

It was an exciting time in the industry when Bruce started as a young research engineer in the association’s Technical Services Division (TSD). In fact, it was one of three major watershed periods that occurred during his professional life in the forest products business. The first was the rise of the southern pine plywood industry in the mid-1960s.

Article by Jack Merry, who served as industry communications director at APA – The Engineered Wood Association from 1992 to 2009 and formed MerryCommunications.

BARNWELL, South Carolina – For German-born Wedig Graf Grote, COO of Swiss Krono USA, who cut his teeth after university studies on the Swiss Krono plants in Eastern Europe, working to build a $230 million, 280,000 m3 production capacity MDF plant in South Carolina was supposed to be a fun challenge. Educated in wood science technology, Graf Grote understands not only what needs to be inside the board, but also how to produce it thanks to his years at the other plants and in a centralized function at the Swiss Krono Group’s headquarters. And while all of that experience serves him well in his daily functions, none of that experience could prepare him for startup and commissioning during a global pandemic while navigating a fairly wide cultural gap.

A lot had already happened at the 350 acre Barnwell site, dating back to 2005 when under the guidance of former CEO Norm Voss, Kronotex (as the Switzerland-based company and one of the world’s leading engineered wood production companies was then called) went from a distribution facility to a laminate and flooring plank producer. By 2014 the Barnwell operation had grown to include three flooring profiling lines and three short cycle press laminating lines along with two impregnation/paper treating lines.

After Graf Grote arrived in South Carolina in 2014, what was called “the small project on the other side of the building” was made bigger. Graf Grote recalls, “We had applied for a smaller version MDF plant, and then decided if we are already investing, let’s go ahead and do it bigger.”